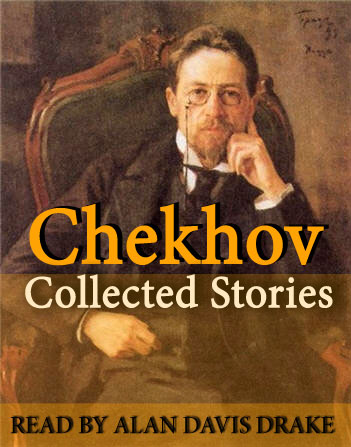 Anton Chekhov (1860-1904) shares insightful moments in the everyday lives of 19th Century Russians. With great economy, Chekhov's short stories reveal the depths of human joy, confusion, dissatisfaction, and sorrow. His tales elicit a deep sympathy for all people, wherever they may be, in Russia more than a hundred years ago or anywhere in the world today. These translations, by Constance Garnett, Marian Fell, and others, are offered here as public domain recordings created both for LibriVox.org and at public performances. The copyright recordings that are clearly stated as such are offered here by permission of the publisher are intended for personal and classroom use only and are not for commercial distribution.

Stories include: After the Theatre, The Album, The Avenger, Bad Weather, The Bet, The Bird Market, The Boys, A Chameleon, Champagne, The Chemist's Wife, A Chorus Girl, A Classical Student, A Country Cottage, A Day in the Country, The Death of a Government Clerk, Difficult People, An Enigmatic Nature, Fat and Thin, A Father, A Gentleman Friend, The Head Gardiner's Story, A Horsey Name, The Huntsman, Hush!, An Inadvertence, An Inquiry, In an Hotel, In the Dark, In the Graveyard, In Passion Week, A Joke (also translate/read as Playing Tricks), Joy, The Lady with the Toy Dog (also translated as The Lady with the Dog), The Lion and the Sun, The Lottery Ticket, Love, The Man in a Case, Misery, The Naughty Boy, No Luck (Also translated as A Blunder), Old Age, The Old House, Oysters, Panic Fears, A Pink Stocking, Playing Tricks, A Problem, The Requiem, Rothschild's Fiddle, A Story Without a Title, The Slanderer, The Student, A Tragic Actor, A Tripping Tongue, The Tutor, Two Beautiful Girls, The Two Journalists, Typhus, An Upheaval, Vanka, Whitebrow (Patch), Who Was She, Who Was to Blame, A Work of Art, and others to come...

"The Man in the Case" is part of a three story series. To listen to the other two, in Chekhov's complete "The Little Trilogy," visit this CloudMountain Production Archive.org project: The Little Trilogy.


Current audiobook length for the short stories only: 11 hours, 40 minutes.

* The five starred (*) chapters are also a part of the "Love and Loss" Audiobook Sampler, which is iPod/iPod touch friendly (with listed chapter headings.) Try it out! Link at the top of the list.

Audio Library and Talking Books
Folksoundomy: A Library of Sound